skip to main | skip to sidebar

Good News: Local Journalism That Made a Difference 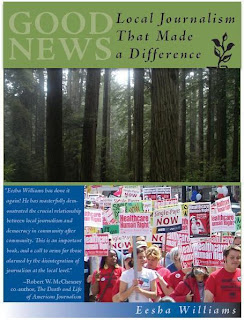 (To enlarge the above photo of the book, click on it.)

On this web page:

"Eesha Williams has done it again! He has masterfully demonstrated the crucial relationship between local journalism and democracy in community after community. This is an important book, and a call to arms for those alarmed by the disintegration of journalism at the local level."

"In an age when few citizens believe that anything can change the world, and even fewer believe that journalism has a role to play in that possibility, Eesha Williams's exciting new book is an extremely important and accessible piece of popular writing. He provides the context and case studies demonstrating that local journalism can expose corporate abuse and help empower communities to successfully challenge it. Must reading for community activists and anyone aspiring to a career in journalism."

"I assign Good News to my students because in the midst of all of the negative news about cuts in the journalism industry, Good News provides students with an important and upbeat look at the difference that quality journalism can make in their communities."

"Whether you're a history buff, a labor activist, an environmental advocate, or just an interested citizen, you need to read this compelling and well-documented account of the good news about journalism: that local is better and grassroots media is alive, well and changing the world -- as it has for more than a hundred years."

Eesha Williams is editor of The Valley Post www.ValleyPost.org

Using four case studies and historical background research, this book explores the relationship between the press and public participation in social change at the local level in recent U.S. history. In the late 1970s and early 1980s, protesters, unpaid and paid workers at nonprofit organizations, lawyers, and local and state politicians were able to close the newly built $6 billion Shoreham nuclear power plant on Long Island, New York, despite every effort by the federal government and the Long Island Lighting Company to open the plant.

In the 1990s, thousands of people attended rallies in favor of saving the ancient Headwaters redwood forest in northern California from logging plans by Maxxam Corporation. Hundreds of people were arrested for non-violent, civil disobedience. In 1996, the federal government bought 7,500 acres to create the Headwaters Forest Preserve.

After a month-long strike in 2006, thousands of janitors in Houston, Texas, who had been earning poverty wages, doubled their incomes and won health insurance for the first time. Most of the workers were women who had immigrated from Mexico and Central America. By going on strike, many were risking deportation.

In the final case study, in 2005 in St. Petersburg, Florida, when Wal-Mart Corporation announced plans to pave a wetland to build a huge store and parking lot, citizens organized to save one of the few remaining areas of open space in their city. The struggle culminated in a marathon public hearing followed by a vote of a key city commission. Hundreds of people attended the hearing to show their support for saving the wetland. In the end they prevailed.

This book examines the role of local newspapers and public radio news programs in influencing these four historical events. It is probably impossible to definitively prove causality in history. But the kind of local journalism that this book examines, while not the sole reason for these grassroots victories, was an important factor. Historians writing about Shoreham and other grassroots struggles have often undervalued the importance of journalism, especially journalism produced by newspapers and radio stations with relatively small numbers of readers and listeners. In the late 20th and early 21st centuries, solutions existed for the problems created by the conventional means of generating electricity. Coal power plants contributed to global warming and air pollution; nuclear power came with the risk of devastating accidents or acts of sabotage, and the tremendous cost of long-term storage of nuclear waste. The available solutions included energy efficiency programs, and generating power with windmills and solar panels. Similarly, there were alternatives to suburban sprawl, clear-cut logging, and the widening gap between rich and poor. But too often, the mainstream media created the impression that there was no alternative to the status quo.

In the early 21st century, ordinary Americans began to realize they would need to reform the corporate news media before they could hope to achieve reforms like increasing taxes on the wealthy to fund anti-poverty programs, or raising the gas tax to improve passenger train and bus service. In 2003, more than 1 million people contacted the Federal Communications Commission to protest its plan to weaken rules that prevented any single person or corporation from owning every newspaper and radio and TV station in a city or town. The FCC voted to weaken the rules anyway, but its decision was later reversed by a federal appeals court. Also in 2003, the first National Conference for Media Reform drew more than 1,000 people from all over the country to Madison, Wisconsin.

Eighteen months later, the second National Conference for Media Reform brought together more than 2,000 people in St. Louis, Missouri. And in 2005, at the third National Conference for Media Reform in Memphis, Tennessee, some 3,500 people cheered when U.S. Senator Bernie Sanders of Vermont proclaimed, “American media corporations are as responsible as President Bush for the disaster we now face in Iraq.” All three events were organized by Free Press, a non-profit organization based in Northampton, Massachusetts.

As of 2008, Free Press’s mission was to fight for “diverse and independent media ownership, strong public media, and universal access to communications.” (The word “communications” referred especially to high-speed internet, which many American homes did not have.) Why did so many people think it was worth fighting for diverse, independent, and local media ownership? As of 2006, the majority of U.S. newspapers, radio and television stations, and the most popular internet news sites, were owned by large corporations. The case studies in this book provide evidence that newspapers and radio stations whose owners lived in the community generally produced better journalism about local issues than newspapers and radio stations controlled by people who did not live in the community.

Chapter One is a short history of the U.S. during the Cold War era. Chapter Two is a short history of the U.S. news media. Chapter Three provides a short history of the U.S. nuclear power industry, and the movement against it. Chapter Four is about newspaper coverage of the grassroots movement to close the Shoreham nuclear power plant. People involved in that fight said local weekly newspapers were more helpful to the activists than the two daily newspapers that covered Long Island news. An analysis of dozens of newspaper articles confirms this view. Not all local weekly newspapers published better journalism than all big city dailies. But, in general, I found that locally owned, small circulation newspapers published better coverage of an issue that involved conflict between the interests of most of their readers – i.e., ordinary Americans – and the interests of a powerful corporation.

Chapter Five provides a brief history of the movement to protect open space in the U.S., and examines the role of media coverage in the battle to save the Headwaters forest. Chapter Six includes historical background on the American labor movement and janitors’ unions, and looks at how media coverage influenced the Houston janitors’ strike. The final chapter is about the history of Wal-Mart Corporation and the role of local newspaper and radio coverage in the citizens’ campaign that stopped a proposed Wal-Mart store in Florida.

A theme that emerged from the interviews conducted with activists and journalists for this book was that they had fun participating in – and reporting on – these struggles for democracy, equality, and environmental protection. Many of these citizens said that, even if these fights hadn’t had the successful outcomes that they did, they still would have been worth participating in. I hope you find this book useful and inspiring.

The paperback book version of Good News: Local Journalism That Made a Difference costs $24 plus shipping. To find out how much shipping costs and when the book will arrive, please go to http://postcalc.usps.gov The book weighs one pound and is 8.5 inches by 11 inches by 0.4 inches. The book will be shipped from ZIP code 05301 within 48 hours of when you place your order. You can choose over-night (the fastest), "media mail" (the cheapest), or any other option offered by USPS. To order, please go to www.ValleyPost.org and click "Donate." Then send an e-mail to ewilliams@valleypost.org with your mailing address.

Alternatively, you can send a check (made out to Eesha Williams) and your phone number, e-mail address, and mailing address, to:

Good News: Local Journalism That Made a Difference is available instantly in electronic format for $9.99 from www.amazon.com. This will let you read it on your computer, Kindle, iPhone, iPad, or similar device. Amazon will not let you print the book, or e-mail it.

cover design by http://dcdesignteamvt.wordpress.com
Posted by Eesha Williams at 3:36 PM